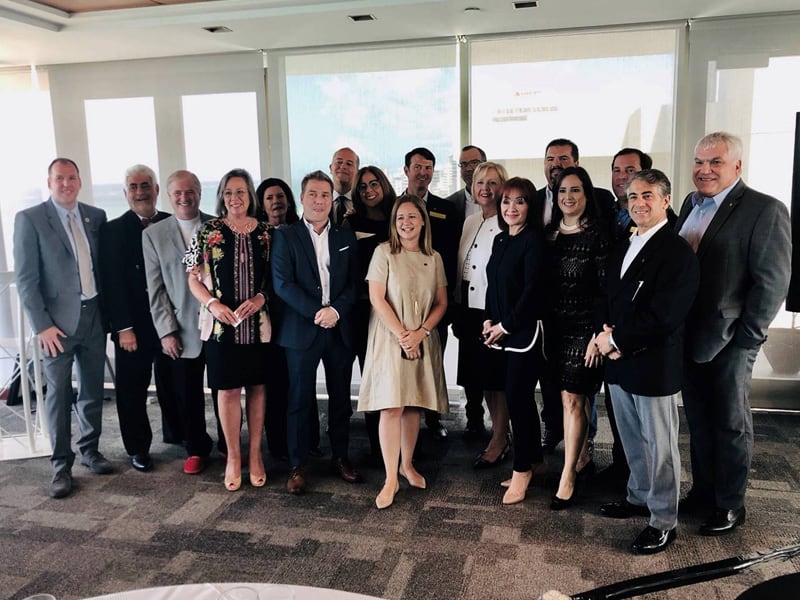 Puerto Rico’s commercial real estate sector has the potential to be a big contributor to the island’s post-hurricane economic recovery, due to a combination of technological innovations in manufacturing and retail logistics, as well as to the disruption of global supply chains as a result of the ongoing U.S.-China trade war, according to a stateside real estate trade economist.

Conway, who is also director of research and corporate engagement at Alabama Center for Real Estate at the University of Alabama, said he was “impressed” with the designation of 97 percent of Puerto Rico as qualifying for Opportunity Zone incentives—an action he noted will enable the island’s commercial real estate sector to take advantage of the global shifts in retail logistics, including continually evolving technologies in warehousing and shipping.

The economist said that the burgeoning growth of online retailers has led to a shortage of facilities that can quickly and efficiently process and ship massive amounts of merchandise. With e-commerce supply chains growing between 25 percent and 30 percent a year, demand for distribution space is so great that builders and developers can’t keep up, he said, noting that e-commerce has taken up 20 percent of total warehouse space in the United States, up from 5 percent just a few years ago.

“Logistics is a great opportunity for Puerto Rico. Online retailers are transforming warehouse construction to the point that demand is exceeding supply,” said Conway, noting that abandoned malls and factories in the states are being converted to warehouses for online retailers such as Amazon, given the high cost of building new structures. “Foreign direct investment is flooding into places with logistics. But you got have to get the infrastructure, such as the electrical grid, right.”

Technology-driven logistics and shipping have brought prosperity to cities such as Charleston, S.C. and Birmingham, AL., which had seen a decline due to closing of factories and military bases, Conway said. They have also become centers for robotics and hi-tech research, he said.

In fact, the southeastern United States—stretching from Texas to Florida—is that fastest growing region of the country, producing half of its gross domestic product, Conway said. Central Florida has become a big generator of STEM-related jobs, he said, noting that the world’s most modern steel plant is being built there. Florida is also considering legislation to legalize driverless trucks, which would be monitored by an air-traffic-control-like system, he said.

“This is a region with a trillion-dollar economy. There is great potential here for Puerto Rico’s economy to form partnerships,” he said, noting that Florida is the state with the most ports.

“Florida is a good bellwether for you guys, because what can’t get tucked away in Florida is finding its way to Georgia, Alabama, and maybe some of that stuff can go south to Puerto Rico,” Conway told Caribbean Business, noting that the island’s distilled spirits industry has great potential to increase exports given U.S. millennials growing tastes for premium and high-end drinks.

Moreover, the trade war between China and the United States has disrupted global commerce to the point that countries such as South Korea, Vietnam, and Thailand are taking advantage of the situation to attract manufacturing and logistics companies, Conway said. The Trump administration’s tax policies have also led to a record number of U.S. manufacturing companies returning to the country, he said.

“Why can’t Puerto Rico benefit from this? You have the proximity to the ports in Florida” he said.

Conway acknowledged, however, that “outdated” legislation such as the Jones Act of 1920, which requires shipping to U.S. ports on U.S.-flagged ships, could limit the island’s ability to take advantage of these opportunities. He urged the Puerto Rico government to form alliances with powerful trade groups such as the National Association of Realtors to lobby Congress to make needed changes to federal policy that would allow for local economic growth.

“On the U.S. side, ports such as Charleston, Savannah, and Miami are able to do things you can’t due to the Jones Act, so fixing that one wrinkle, that impediment could accelerate things,” he said. “That’s why I think you need the help of the industry groups like CCIM. They can say, ‘Look, if you really want to see Puerto Rico back on its feet, these outdated things have to be addressed.’”

The economist also acknowledged that the island also faces great perils if the U.S. housing bubble blows up and another great recession comes about.

“We’re headed towards another real estate disruption, and you guys are going to feel it. You’re not going to be immune from it,” said Conway, who advised former Federal Reserve chairmen Ben Bernanke and Alan Greenspan on the real estate industry, and regularly briefs the Fed. “On the bank side, the regulators, the FDIC and everybody will paint a broad brush and say no more real estate loans, we are going to make you hold more capital; we are going to shut down construction loans, because construction costs are greater than the value of the property. You guys will get caught in that broad paintbrush. You have to tell the story of what’s happening here to the ratings agencies.”

Conway said his organization, which has offered help the local industry, recognizes that Puerto Rico “is an area of the United States that has been treated unfairly and punitively.” He said it was “disingenuous to pick on Puerto Rico” due to the local corruption cases, noting that politicians in major cities such as Atlanta, Miami and Chicago have been convicted of corruption. He said the mass protests that led to the ousting of former Gov. Ricardo Rosselló last month show that people in Puerto Rico took action to safeguard the integrity of recovery efforts.

“That is quite a testament. Capital loves that story. That’ll bring more capital,” he said. “I was talking to some ratings agency guys in New York and they commented that given all the things Puerto Rico has had to deal with, how they handled this transition of power and the turmoil, is absolutely amazing. One of them said that maybe Hong Kong and China should take a cue from Puerto Rico on how to handle this.”